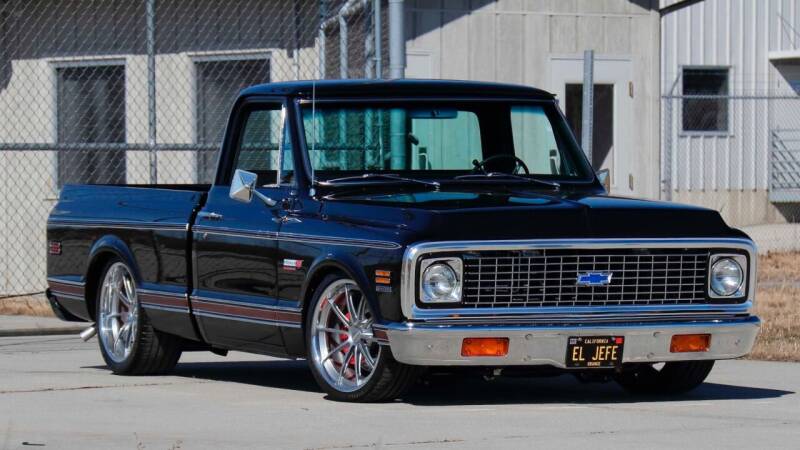 This 1972 Chevrolet C10 is the product of a meticulous 1,500-hour nut-and-bolt build and retains its original 402 CI big-block V-8 engine mated to an automatic transmission. Having traveled a mere 200 miles since the build, the truck is finished in a black exterior with a black houndstooth interior and factory air conditioning. The C10 is ready for the demands of modern traffic with its RideTech coilover suspension, big Baer brakes featuring 6-piston calipers, and bright Forgeline two-piece wheels. Must See To Appreciate Comprehensive nut and bolt build More than 1,500 hours in build 200 miles since build Original 402 CI big block V-8 engine Automatic transmission Black exterior Black Houndstooth interior Factory air conditioning RideTech coilover suspension Baer Big Brakes Baer 6-piston calipers Forgeline 2 piece wheels Chevrolet trucks have been on the road for more than a century, with the company producing its first pickup way back in 1918. The Bowtie trucks have been good sellers ever since. This C10 is a part of the C/K truck line that began production in 1960 with a series of light-duty and heavy-duty pickups. The C10 was a rear-wheel drive half-ton model with choices of a 6.5-foot bed on a 115-inch wheelbase or an 8-foot bed on an extended 127-inch wheelbase. The C10 featured an increased load capacity for its front axle, as well as a larger cab and bigger windshield, all of which contributed to overall better weight distribution than prior models. The second-generation C/K pickups began production in 1967 and were originally known as the Action Line trucks, though they were eventually referred to as the Glamour Pickups. The second-generation C/K trucks sat lower to the ground for easier access to the cab, while the exterior was updated with a double-wall steel box and rust-resistant bodywork. This particular truck is from the final year of the second-generation C/K line. It has all of the improvements made during the first 12 years of C/K pickup production. This C10 is desirable because of the exacting standards adhered to in its comprehensive build, its low stance and its black exterior finish contrasted by its stylish houndstooth interior.