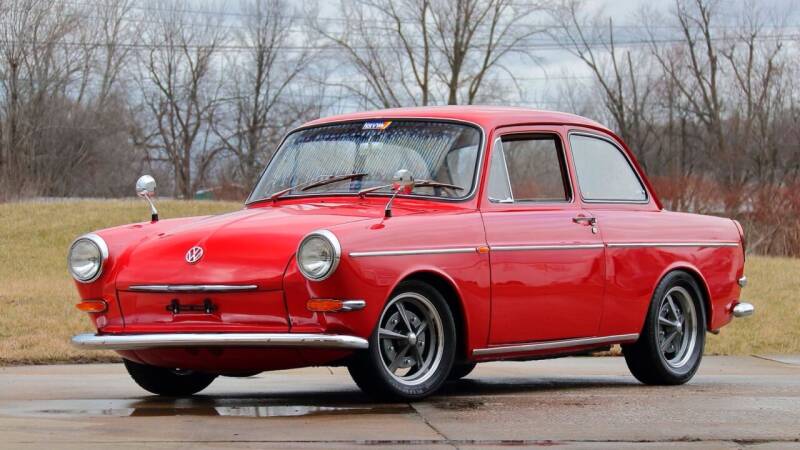 Ready to trade in?
Let us know what you have.
Have additional questions?
Give us a call and we'd be happy to help!

Rare 1500 Notchback Few were imported to the U.S. Approx 8 Notchbacks Known Custom built narrowed 3" adjustable beam Custom built 1641 cc 4-cylinder engine Manual transmission Red exterior Gray/Tan interior Factory dual carburetors Large sump Ceramic exhaust Featured in “Hot VWs” magazine These compact cars were manufactured by Volkswagen at its Wolfsburg and Emden plants from 1961-1973, and they featured Notchback, Squareback and Fastback body styles. Even though it sported a rear engine, the Type III added to Volkswagen’s product range that included the Beetle, Karmann Ghia and Bus. It did stay true to a number of the Beetle mainstays, including the air-cooled flat 4-cylinder engine in the rear, rear-wheel drive, torsion-bar suspension and the same 94.5-inch wheelbase. The Type III was intended to be more of practical car for a family than the Beetle, with passenger and cargo space increased as well its engine size. With body-on-chassis construction plus bulbous and slab-sided or “pontoon” styling, Volkswagen approved the design of the Type III in 1959 and first showed the car at the 1960 Geneva Auto Show in Switzerland. Only a limited number were imported into the U.S., with Volkswagen of America finally making a commitment to import some Squareback models in 1966, but not the Notchbacks. In 1973, the Wolfsburg plant phased out production and retooled to build the Golf, which soon became Volkswagen’s latest sales success. Even today, the Type III represents the kind of purity of purpose and design that makes lightweight Volkswagens a joy to drive With a curb weight of less than 2,000 pounds, this 1964 Volkswagen Type III Notchback is a true featherweight and one of the few examples that were imported to the U.S. Also known as a 1500 Notchback, this particular machine features a custom-built, narrowed third adjustable beam, as well as a custom-built 1641cc 4-cylinder engine fitted with dual carburetors and a large sump mated to a manual transmission. Previously featured in Hot VWs magazine, the car is finished in a bright red exterior with chrome trim and a ceramic exhaust system. The interior sports a combination of tan colors with bucket seats